Hurricanes and spiders and more...oh my.

This week has been crazy

1. I found a tarantula the size of my head behind the washer and we spent an hour killing it. I will attach a picture. Literally terrifying. I have a video but it's too big to send. I'll show y'all later. I was washing my clothes and every time I got close to the side of the washer I could feel the spirit saying "be careful", I didn't think anything of it and moved. Then I went to sweep and I looked behind the washer to sweep there and I saw a HUGE thing with 8 legs.  At first I thought it was a toy to scare me, but then I realized it was alive and I screamed and ran as fast as I could. I  grabbed my camera while screaming.  My comp was confused so she followed me back and I showed her. HUGE. Literally the biggest spider I have seen in or out of captivity. My comp finally killed it by hitting it with the broom. So that was an adventure.

2. We had General Conference. Loved it!!!  Most of it was in Spanish, but I did get to watch one session in English so that was good.
Oh, isn't the Prophet  the cutest thing ever.  Did you see him do a thumbs up as he walked out? I cried.
Also, Elder Nelsons talk was my favorite, The end is near guys...

3. So there is a hurricane here. I walked in knee deep water to get here to email. It's been a blast. It's been threatening to come for a few days now but last night we got a text from the government  saying that we might need to be evacuated so to be ready. Then a few hours later we had a conference call with our zone. They gave us instructions to have our 72 hour kits ready and also to have a backpack ready to leave. So we did that and were running around putting our books in plastic bags and up on high shelves. Any way, we woke up this morning and almost didn't get permissionn to go buy food. We didnt have ANY food in the house to eat except for 72 hour kit stuff. Sooooo right now we are fine. It's raining a ton and hard with a lot of wind, but we are fine.

(Side note from mom)  the news says they at supposed to get 15 to 25 inches of rain due to this Hurricane.  I cannot even imagine that much rain falling.

Okay thats all for right now.  Love you all.  I'll talk to yall next week. Wish me luck here. lol 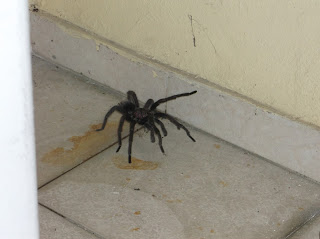 The Spider that almost ate me!
Posted by Brandon Shepherd at 4:56 PM