Starting from the top

We had a training transmission on Wednesday that was three hours long all in Spanish and my head was hurting so bad by the end. It was overall good though. It was basically everything that we learned in CCM over again. We were fed lunch and it was amazing. La Bandera Dominicana. Rice has come to be my best friend. Also, on Friday we ate lunch at a members house and the food was amazing except for avacados. I have gone my whole life never eating avacado because I was sure I wouldn't like it, and I don't.

HAHA, okay so during lanuage study we read the scriptures in Spanish and then translate each verse.  I was reading Alma 43.19 and the very end directly translated says "and also to protect themselves in the head". Hermana Meldrum and I and were laughing so hard. It's the correct translation, it just isn't good English.

The hardest part about baptizing people here is that they don't get married legally. After living together for some years they just call themselves husband and wife and think they are legally married. They know that the church is true, but they dont want to get married to their person and it's so frustrating. They have to come to church three times before they can be baptized and church is at 8am. Nobody wants to get up that early, and Sundays are the days that they wash their hair.   So if church interrupts that then they won't come.

I have found The Jugo of life. Its Chinola con Avena. Wow! I could drink that all day erry day.

We had 30 lessons this past week which is awesome. YAYYY!!!!

I was reading in Revelations this last week and if you haven't read that do it, because woah, crazy things!

We had a zone activity today which was a ton of fun. We played some volleyball and had hot dogs for lunch and then talked about school and stuff. My zone is so great.  A lot of them only speak Spanish, and I'm not quite good enough for regular conversasions that are not about gospel things. I don't know any of  the vocab for that really, but I'm getting there.  Hermana Meldrum said my accent has gotten wayyy better!

I've got a pretty sweet tan line on my feet. and tons of misquito bites. I'll try to get a picture on the dropbox with it.

Okay, have a great week all!

Posted by Brandon Shepherd at 7:27 PM No comments:

So yesterday I hit my two month mark, so thats a fun time!

I dont have much time so I'll just hit a few points,

First, Chinola is the bomb and also pear nectar. The food here is so great. We got a coconut from the store and the guy there cut it open for us and it was so sweet it didn't need sugar or anything!  For my cuplimes the hermanas surprised me with a pizza that was no joke the best pizza I've ever had. They are so sweet. I have been eating a ton of rice too. It's so good.

I am so excited!!!   Okay, so there is a sister in our ward who isn't baptized because she doesn't want to get married.  She decided that it was time and she is planning to be married in time to get baptized for her birthday!! She is such a wonderful person. Dominican people are so great. We have a baptism set for the 31st with una mujer, Eli, she is so great. Her dad just got baptized last week and he has been such a strength for her, then we should have two more baptisms on the 6th.

It's crazy this transfer is almost over. I am loving it though. Hermana Meldrum is a fantastic teacher. She is very patient with my Spanish, which is getting better everyday. I am able to say mostly anything I want pertaining to the gospel. Conjugating is getting easier and easier and I can use a lot more complex things faster without thinking about it.

We went to the zoo today and that was so so fun. We saw some big snakes in cages and some way big spider webs everywhere in the trees and such. I have seen a lot more spiders recently. I was sitting on the little terrace that we have eating my breakfast when I see a huge one right next to me hanging in the air.  I freaked out and threw my Liahona magazine and ran!  Then I came back to get my cereal and within one minute I killed three more spiders right there.

I ate some sugar cane this week and it was pretty good. not amazing.  I would prefer oreos. or tootsie rolls. I have found oreos here but not tootsie rolls :(

No pictures this week, but I will post some next week when I have more time.

Anyway, things are great, I hope yall have a wonderful week and I should be on again on Monday!!

Love you all!
Hermana Shepherd

Posted by Brandon Shepherd at 6:27 PM No comments:


I am working on getting all my pictures in dropbox. It is a process on this computer. The internet is very, very slow today. So we'll see how this goes.

Im loving it here in the DR. The people are so, so amazing and loving. We are working so hard and have a few baptisms within the next month or so.

Interesting fact, we get cat called every day at least five times a day.  So that's pretty fun. If we tell them we are missionaries they usually say,  oh sorry.

I read  "Our Search for Happiness" this week and it was very, very good. If you haven't read it you should do so. I also read a talk called "Miracle of a Mission" by Elder Holland from an MTC devotional in 2000. It has helped me out a ton already.

Ahh. I am running out of time. Okay, my spanish is doing good. I can understand a lot of what people are saying now.

One fun thing, the milk here is boxed and its not very good, but you can't tell in cereal sooo, neato!

One more thing.  My pday might be on Tuesday next week.   We are hoping to get permission to go to the zoo and its not open on Mondays

I will talk again next week!   Love you al!
Hermana Shepherdl 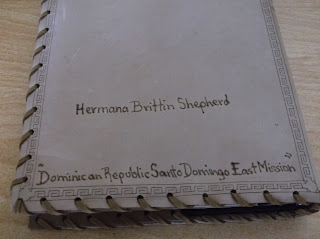 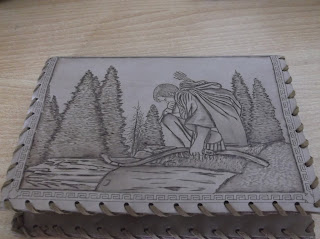 My scripture cover I had made in Mexico. 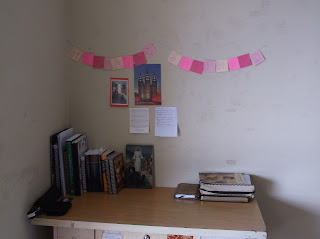 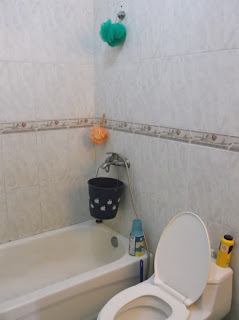 How to flush the toilet, fill the bucket and dump into toilet to flush. 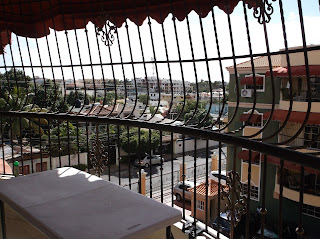 Posted by Brandon Shepherd at 5:16 PM No comments:

I am in the DR. It is way different than I expected. I am in a city right next to the capitol. The area is called Mendoza B. Its a lot like Mexico City, but smaller buildings. Everything is very close together. It's quite different from Wenatchee, hahaha.

SO, the water situation. The toilets dont flush really. You have to pour in water from a bucket and thats how you flush it,  manually. So thats neat. Our shower head doesn't work so we use a bucket and a cup. ALSO there is no warm water. Its okay though because I am so hot  that I would take a cold shower  even if I did have warm water.
I already have a tan line from my shoes.  NO sunburns yet, so WOOHOO.

No pictures this week because I dont have time to figure out how on this computer so lo siento but next week I will post some.

The flight here was pretty neat. I am like a pro at flying now. I got through by myself doing customs all in Spanish.

Haha, the Spanish here. I have no idea what is going on. I'm learning but its so, so, so different from Mexican Spanish.

I haven't taken many pictures yet. I dont feel comfortable taking pictures on the street because I dont want to look too touristy .I did get some of my casa. It's quite cute and the scenery is great.  We work on our roof in the mornings during the sunrise. It's great. It is very, very, hot though and very humid.

My companion is Hermana Meldrum. She is amazing. She is exactly what I needed to start out well. We are working hard every day. We did four visits on Tuesday. I got to the house at 3, unpacked and we left to teach until 9.

I have extended 6 baptismal invitations so far and everyone has accepted. (when you know will you be baptized).

So far not too many bugs. Its mostly flies everywhere.

I miss District 13 A and I hope all y'all arrived safely and have loved your first week!

IF YOU SEND A PACKAGE JUST KNOW THAT I PAY TWO DOLLARS FOR EVERY POUND TO RECIEVE IT. K, THANKS

Entonces. I am great, the DR is great. idk what more to say! Livin the life! 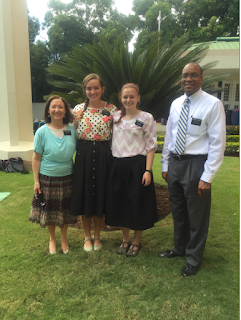 Hermana Shepherd  and Hermana Melendrum with President and Sister Corbitt