In the August 2016 Liahona there is a talk by David A Bednar called "The lords will and timing."   This is something that I have been focusing on a ton this transfer.   The talk tells of a newly married couple that  after only 3 weeks of marriage the groom finds out he has cancer with only a 30% chance of survival.  Elder Bednar went to visit this man and before giving him a blessing asked him a few questions.  One being "John, do you have the faith not to be healed?"   "Do you have the faith to submit to his will?"


The talk goes on to say that certainly Heavenly Father can heal him, but maybe that's not what needs to be done.  John decided that he didn't want to die, but if it was the will of the father then he would accept it.   John commented after the blessing that he thought because Elder Bednar was an apostle the blessing would be different, but it wasn't.    He used the exact words that all the others did when giving a blessing.  God's power and will is the same, always!


I have been working a lot lately on following Gods will whether or not it be what I want. Transfers are this week and President came to me and extended the call for me to be a Hermana leader.  He went on to say, sorry it's long awaited.  I would have extended the call a long time ago, you have enough wisdom, you are diligent, obedient, and a great missionary.   I just didn't want to push you more than you could handle with the health problems you have been experiencing.


I am thankful to him and I know that I am now ready to handle the calling of Hermana leader, it's all in the lords time.  I am staying in Los Frailles with a new companion Hermana Villamas from Peru.  I am very excited about this new adventure, but sad to not be companions with Hermana Castillo anymore.


Great news - we had 6 investigators at church on Sunday.  We have struggled to find new investigators in this area so that was awesome.  Again in the lords time.  We just have to put in the hard work and the lord will do the rest.


We are working with a woman named Roberta. We found her on the street and she is golden :)  She is very excited to become part of our religion.


Everything else is good here, I am feeling better and it's only 20 days until I get  to skype for Christmas.  Yah!!! 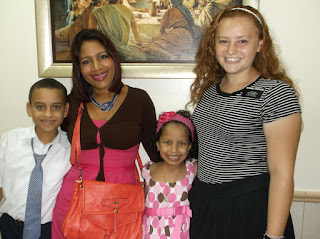 Posted by Brandon Shepherd at 4:08 PM